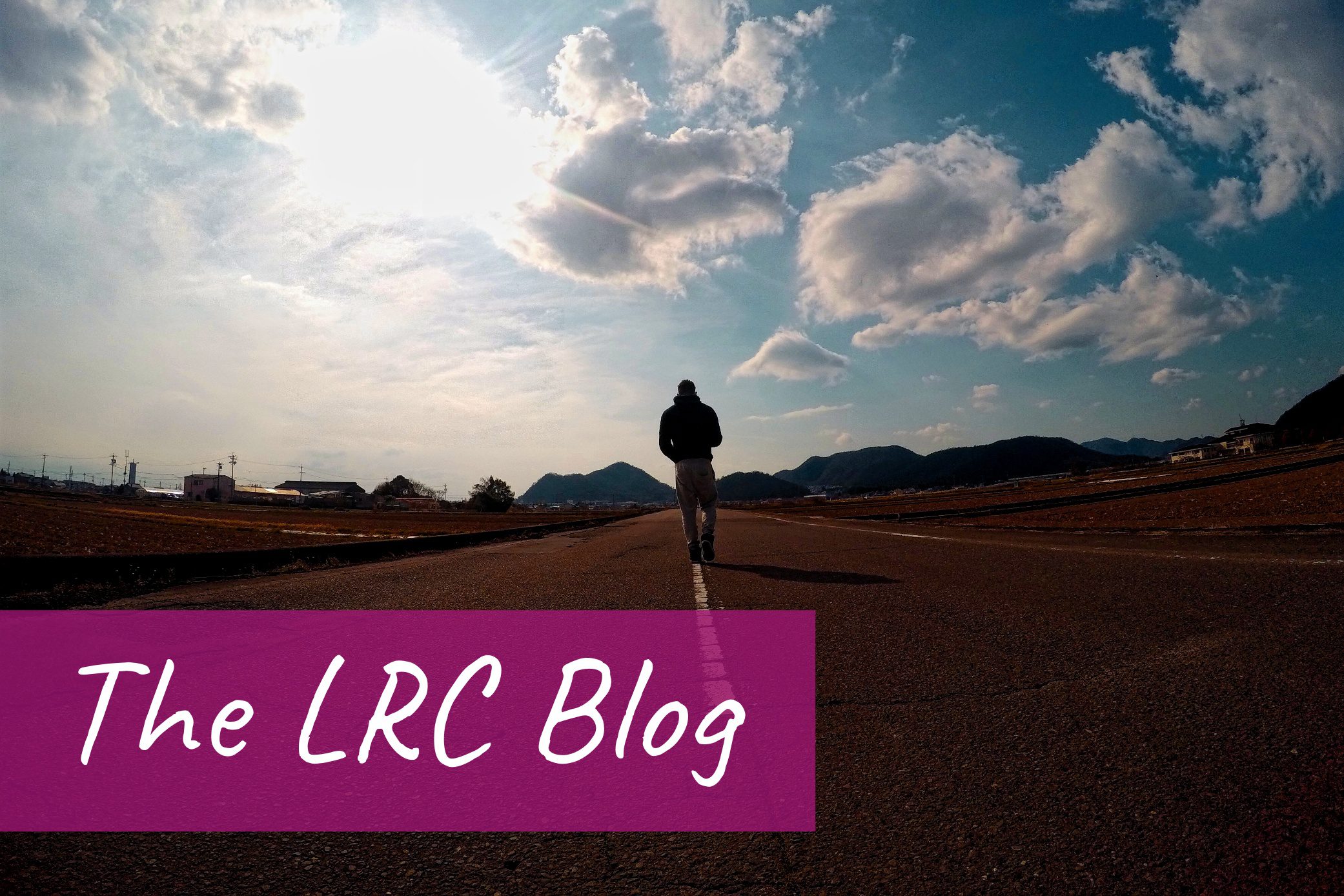 In last week’s blog entry, there was a brief mention of the tutorial topic being rolled out to our students regarding ‘County Lines’. This is an important issue for our young college community to be made aware of and still be addressed, just slightly later than planned. It has, however, been replaced by an equally weighty subject – mental health and dealing with grief.

The mental health of our students is a priority for College staff. Like many institutions like ours, we have welfare and safeguarding officers plus a team of staff whose responsibility it is to look out for student well-being. They are acutely aware that the likelihood of any one of them being affected by the loss of family or friends is elevated right now, something that has been highlighted in two recent high profile documentaries.

The first of the two documentaries was shown on BBC Three. In an hour-long programme entitled Our Silent Emergency, radio presenter Roman Kemp explored the mental health and suicide crisis affecting young men. When he lost his best friend, 31 year old producer Joe Lyons who took his own life last year, he had no idea his friend was struggling.

In the BBC documentary, Roman spoke with Professor O’Connor about some of the things that can help people at risk of suicide, such as a written safety plan in which people are asked to think about what makes them suicidal, to think about things than can distract them and to identify people they can call in a moment of crisis.

Roman also spoke to a group of young men who had lost their friend to suicide and their one piece of advice was to ask your friends twice whether they are ok. Asking once they said you will probably get a simple ‘yeah, fine,’ ask again and they might actually tell you the truth.

#AskTwice, a 2021 campaign launched by the organisation Time to Change reinforces this idea and was developed to help tackle the stigma associated with mental health. Time to Change has said that now, more than ever, everyone’s mental health is under pressure and is encouraging everyone to work together to tackle mental health stigma and discrimination by getting people to ask not just once, but to ‘Ask twice’.

Click on this link to watch Roman Kemp: Our Silent Emergency, available on BBC iPLayer now.

The following evening, Channel 4 aired Caroline Flack : Her Life and Death. The documentary featured interviews with several family members and close friends, who talked about her life, how her career started,and how certain events caused her to take her own life. They painted a picture of a wonderfully vibrant character, so outwardly confident but fragile in many ways. None of them were surprised by what she did but the common link with all those interviewed seemed to be that they wished they’d known just how low she was at that time. When her friends enquired how she was, Caroline would always say ‘I’m fine’ which would usually allay people’s fears for her temporarily. This reiterates the point made in Kemp’s documentary about why we should be asking twice,

Caroline Flack didn’t want people in general to know about her depression but the press brought this very personal aspect of her life to the public’s attention following her arrest after an altercation with her boyfriend. This press intrusion into the state of her mental health appears to be a large contributing factor to her suicide. The bubbly character presented on the screen was the only one she wanted people to see.

This documentary is available on 4oD.

Geezers
One of our colleagues highlighted the podcast Geezers Grief which focuses on men and mental health, and how talking to a friend or trusted adult can be one of the best ways to improve your mental health.

Tom & Mason Chisholm set up Geezers Grief to do just this: get men talking. They have recorded a series of podcasts where their guests have the opportunity to talk about their thoughts and feelings and for others to listen. In 2018 they lost their dad to cancer and found that they had their own struggles with mental health.

They came to realise that as ‘Geezers’, their thoughts and feelings were often kept in their own head. This, through their experience, is probably the worst way to combat mental health issues. They found that by talking to others, they could find peace and positivity in the darkest of times. So in 2020, they decided to start this podcast in the hope it gets men to open up.

Click on the link to listen to their podcasts now.

Books
Young children have a very different understanding of the meaning of death to adults. It’s during adolescence that we start to ask questions about mortality – our own and that of those around us. (Speaking personally, I witnessed my own children deal with the loss of a younger brother. My daughter, 11 year old at the time, seemingly coped admirably, even reading a poem at his funeral service which is more than I could have done, but her struggles became more apparent as she entered her teenage years.) It’s no surprise then that YA literature is awash with books where grief, loss and mental health feature heavily, and that some of these books are very, very popular.

John Green’s body of work deals heavily with various aspects of teenage mental health. Turtles All the Way Down has Aza as a central character – a young lady with OCD and anxiety, both of which have a profound effect on her life and relationships. Looking for Alaska takes a close look at a group of friends dealing with the death of their school friend, Alaska. The Fault in Their Stars offers a picture of teenagers living with cancer and grieving for the friends that succumb to it, and dealing with what a cancer diagnosis means for them when faced with the deaths of their peers.

Stephen Chbosky’s Perks of Being a Wallflower centres on Charlie who has suffered from clinical depression since early childhood. We meet him a year after he also lost his best friend to suicide. He’s beginning high school and forging new friendships. The story follows him and his new acquaintances, Sam and Patrick, and delves into his history to find the reasons why Charlie is as he is.

The Hate U Give by Anglie Thomas follows Starr, a black teenager who exists in two worlds: her troubled neighbourhood Garden Heights and her mainly white private suburban school. Already struggling with balancing between these very different environments, Starr’s life is completely turned upside down when she witnesses the fatal shooting of her childhood friend Khalil by a police officer. Traumatised by what she has witnessed, Starr hears speculation a lot at school, where no one knows she was there when Khalil was killed, as she privately mourns the loss of her friend.

A Monster Calls is written by Patrick Ness but the idea behind the book originally came from  writer Siobhan Dowd. She never got to write the story. When she passed away from cancer, her publisher asked Ness to write it. The story concerns Connor, the monster that calls at the window every night at 12.07, and Connor’s mother who is dying of cancer. It became an award-winning book. 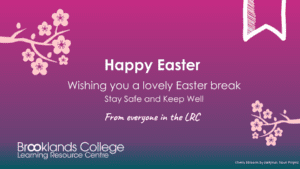 Remember to ask Are you okay? And to #AskTwice.

Much of the text for this blog can be found in this display that we presented for the students on our Google Classroom.

Happy Easter
We’ve reached the end of yet another very weird and unusual term. Enjoy the Easter break and let’s see what the summer term has to offer. 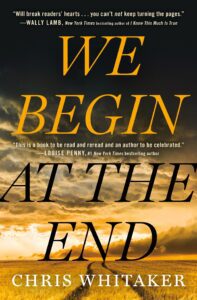 Book Review
We Begin at the End by Chris Whitaker
Rating: 5/5

Vincent King is about to be released from prison and will be returning after 30 years to the small coastal town of Cape Haven in California, where as a teenager he was responsible for the death of a young child. Interestingly, a fair number of the town’s residents will be welcoming him home despite this, including the chief of police, Walk – once Vincent’s childhood best friend. Walk doesn’t like change and has never strayed far from his town and would love to go back to the easy friendships of his youth.

The dead child’s older sister, Star is Vincent’s former girlfriend and, unsurprisingly, doesn’t want to see him again. This view is passed on to her 13 year daughter old Duchess – a young lady far older but not necessarily wiser than her years. She just wants to protect her mother and younger brother, and cannot see how any good will come from Vincent’s return.

There are many other characters in this story but Duchess and Walk are at its heart. They each have the common goal of protecting those that they love, despite any obstacles put in their way.

This is crime fiction but it’s a fine example of why this genre is so difficult to simply put in a box with a neatly tied bow on top. It’s a story about family, about love, about loss, and redemption – with a murder to solve and a few other mysteries mixed in for good measure. It’s heartbreaking in places but it’s an intriguing tale not to be missed.

Book Loans
Worried about fines during lockdown? No problem. All loans have been renewed and fines waived whilst the LRC was closed. Book returns can now be returned to the Library Desk or renewed by email/telephone.

E-Book of the Week 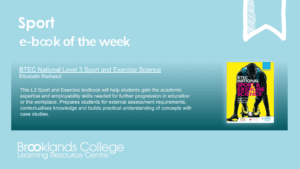 An e-book of the week for our Sports students.

Tip of the Week 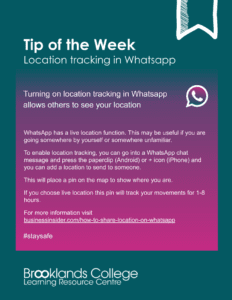