STUDENTS: We are remote learning - Click Here For Info
HomeNewsBlogsThe LRC BlogI’m Ready for my Close Up 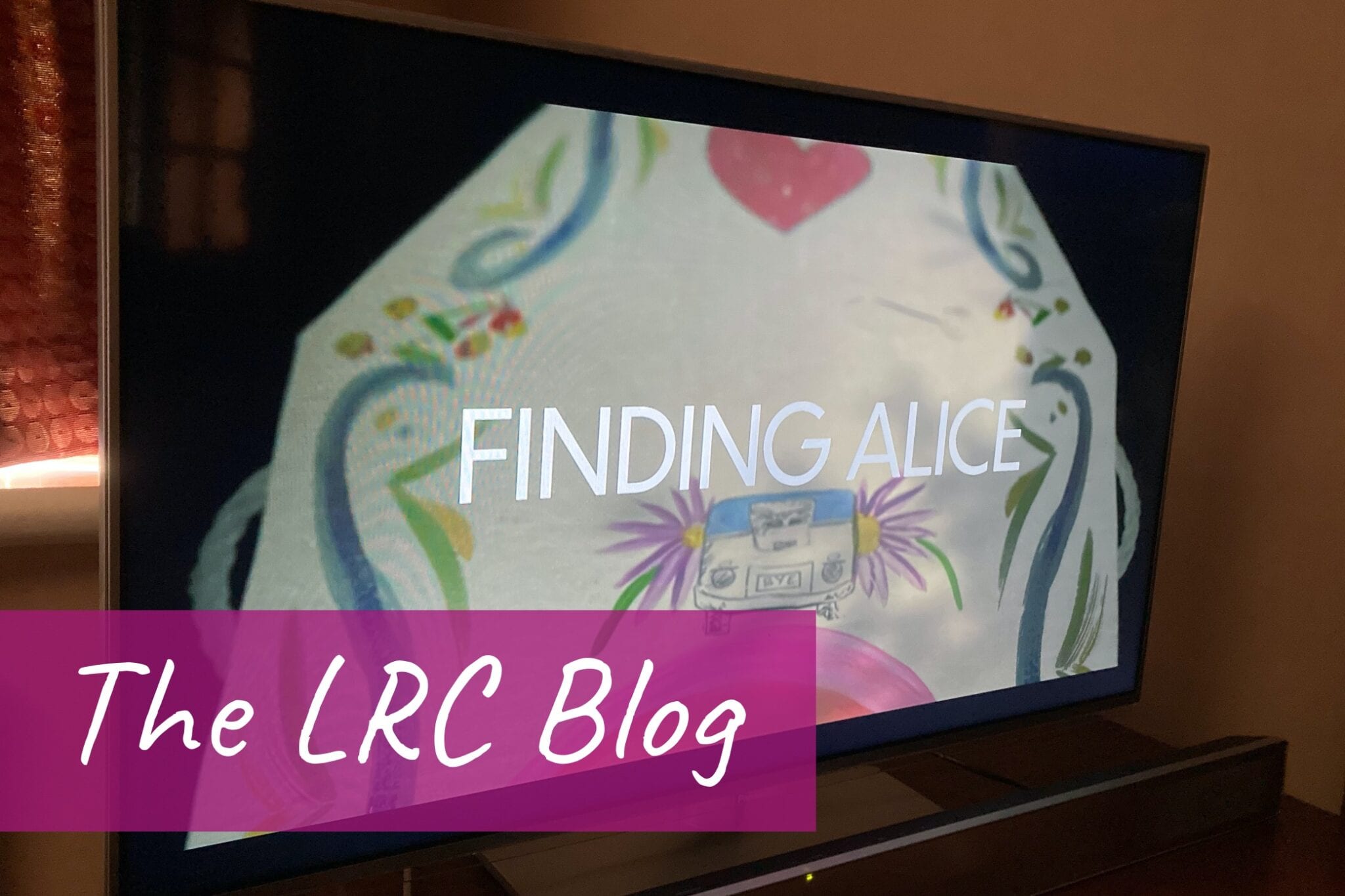 I’m Ready for my Close Up

Last week (Sunday 17th January) saw the start of a new series on ITV called Finding Alice.  Why is this worthy of a mention? you may well ask. As it happens, for the few weeks preceding lockdown, one of the car parks of Brooklands College was being used as a base for the TV crew whilst filming was taking place around the area. This was accompanied by a flurry of reports on social media of Keeley Hawes being spotted in the vicinity as much of the filming was taking place in and around the Weybridge area, as well as other Surrey locales. All very exciting but the icing on the cake for the College community was that some of our buildings were to be used for interior scenes.

The opening episode featured a very brief scene of Keeley Hawes’ Alice asking at a hospital reception desk where she could go to view her deceased husband’s body. That, reader, was in fact the main reception for the College, which is situated next to the LRC. Some of our bookcases were moved to one side as there was no reasonable excuse as to why a general fiction collection would be situated in a hospital reception. The College did get to keep some of the rather attractive window dressing however – a picture here, a mural there.

Filming was halted in March due to Covid 19 but, when College reopened in September, the large white vans of the filming crew were back in the car park and filming resumed. Give a thought for the poor actors suffering for their art. Initial filming was in the winter but we had a glorious September. For continuity sake, there are bound to be a few actors sweltering in their winter woolies.

The College had a lovely mention in the local press. Surrey Live said “The production team are particularly thankful for the ‘incredibly helpful’ Brooklands College…[the team] used it as a unit base for much of the time, as well as for filming locations of a hospital reception, as well as its grounds for a running in the woods sequences and a greenfield site”.

Twenty Years on from the Publication of Noughts & Crosses
One of the BBC’s successful and well received productions last year was an adaptation of Malorie Blackman’s Noughts and Crosses. The story, set in an alternative Britain, where native Africans have colonised European people rather than the other way round. There’s no official sign that there will be a series 2 but there’s plenty of material to work with.

It has been twenty years since Blackman’s book was published. It wasn’t her first book. She already had several other young adult and childrens books under her belt – but it spawned a five book series and has been listed as one of the BBCs Big Reads – a survey in 2003 of over 750,000 readers to find Britain’s best loved books.

From 2013 to 2015, Malorie Blackman was the Children’s Laureate. The post was created in 1999 and is awarded once every two years to a  writer or illustrator of children’s books who have displayed outstanding achievement in their field. The list of appointees does read like a list of favourite authors/illustrators. When 20 years of the Children’s Laureate was celebrated in 2019, all the post-holders wrote a letter about their role.

The full text of Blackman’s is here but she starts with “Dear reader, I was honoured to have been the 8th UK Children’s Laureate from 2013-2015. With the help of BookTrust, the role gave me the opportunity to focus on bringing books to teens and teens to books – a cause very dear to my heart”

And, as an LRC, we have tried to help bring her books to teens. She is probably the most prolific writer on our (fiction) shelves. See our book review below for one of her books, Boys Don’t Cry – a favourite with more than one Brooklands College librarian. 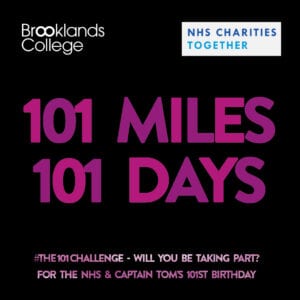 The Brooklands College 101 Challenge
Inspired by Captain Sir Thomas Moore and his amazing fundraising campaign back in April, the College has created a challenge for staff and students – to walk 101 miles in 101 days. It will be a fundraiser for NHS Charities Together but it will also be an activity geared towards raising morale, as well as one to keep us all fit and healthy through this current lockdown. It’s anticipated that there will be a wide range of activities and challenges running alongside this one, with the hope of many students joining in and feeling part of a team whilst remote learning is still very much at the forefront of their education.

Never let it be said that LRC staff shy away from a challenge. Three members of staff – Alison, Deb and Sian – are donning their tights, charging their GPS watches and lacing up their trainers as each has committed themselves to running 101 miles in 101 days. Other members of the team are taking the pace more slowly and choosing to walk 101 miles by Sir Tom’s 101st birthday.

(As a librarian, my instinct was to gather 101 one line book reviews from staff and students. It may still happen.) 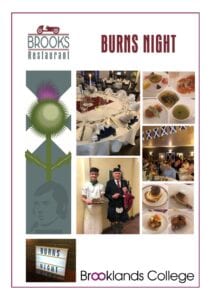 Burns Night 25th January
The College has its own restaurant which would normally be open to the public, with the dishes prepared, cooked and served by the Catering & Hospitality students. (I can highly recommend giving it a try once it’s safe to reopen). A regular date on the Brooks Restaurant calendar would be Burns Night where traditional Scottish savoury delicacies (yes, haggis) and desserts would be served, with service accompanied by bagpipes. Click the following link for a flavour of what we are missing this year and hopefully will see again in 2022.

A traditional introduction to a Brooks Restaurant Burns Night

27 January marks the anniversary of the liberation of Auschwitz-Birkenau, the largest Nazi death camp.

The Holocaust threatened the fabric of civilisation, and genocide must still be resisted every day. Our world often feels fragile and vulnerable and we cannot be complacent. Even in the UK, prejudice and the language of hatred must be challenged by us all.

HMD is for everyone. Each year across the UK, thousands of people come together to learn more about the past and take action to create a safer future. We know they learn more, empathise more and do more.

This year’s theme is Be the Light in the Darkness where everyone is asked to reflect on the “the depths  humanity can sink to, but also the ways individuals and communities resisted that darkness to ‘be the light’ before, during and after genocide”.

An online ceremony has been organised (you can register to take part here) which will be streamed at 7pm on the 27th. Households are being encouraged to light a candle – the Light into Darkness – in a window at 8pm. 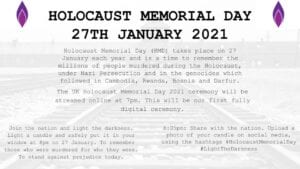 Here are a few other resources:
Learn about the Holocaust and genocides

To find out more about how Gypsy, Roma and Travellers were persecuted by the Nazis visit these pages.
Roma and Senti people
The Gypsy Holocaust? : Forgotten Victims 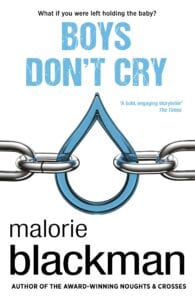 I have to admit there was a slight scratching of the head at the opening of the book as Dante sat waiting for the postman to bring him his A level results, pondering his future. Waiting for his exam results in the post? No one does that. It has to be said, however, that this does add to the shock arrival of, not the postman but Melanie, a past acquaintance, complete with baby in tow. She can no longer cope with her baby and decides to leave her with her father, the completely unsuspecting Dante.

What follows is the story of the upheaval for Dante and his family, the realisation of what having the responsibility for a child will mean for his life now and for his future, and ultimately how he grows up.

Other than the initial misstep of results arriving in the post, the book is very, very good. It’s easy to read and even easier to get caught up in Dante’s life and the situation he finds himself. in.It’s a situation that most 17 year olds would be just as horrified to find themselves in as he was.

Eddie Izzard has been known for taking on some jaw-dropping running challenges in the past. In 2009, she ran 43 marathons in 51 days for Sports Relief across the four nations of the UK – a huge challenge for the most committed long distance runner, let alone a novice with just a few weeks training behind her. After a few years rest, she was back with another challenge for Sports Relief – 27 marathons in 27 days across South Africa. Due to a hospital stay mid-challenge, she had to run two consecutive marathons on the last day to catch up.

This year, the challenge is on again. Raising money under the banner #MakeHumanityGreat for five different charities – Walking With the Wounded, Care International, United to Combat Neglected Tropical Diseases and Covenant House New York City – she aims to spend January completing 31 marathons in 31 days. On a treadmill.

Anybody who has ever run on a treadmill knows how mentally challenging this is, never mind physically. Good luck, Eddie – it certainly puts our 101 miles in 101 days into some perspective!

Book Loans
Worried about fines as we enter another lockdown? No problem. All loans have been renewed and fines waived while the LRC is closed. Book returns can wait until the College has safely reopened.