STUDENTS: The plans to return to on-site learning - Click Here For Info
HomeLatest news“If you don’t learn from history, you are doomed to repeat it.” 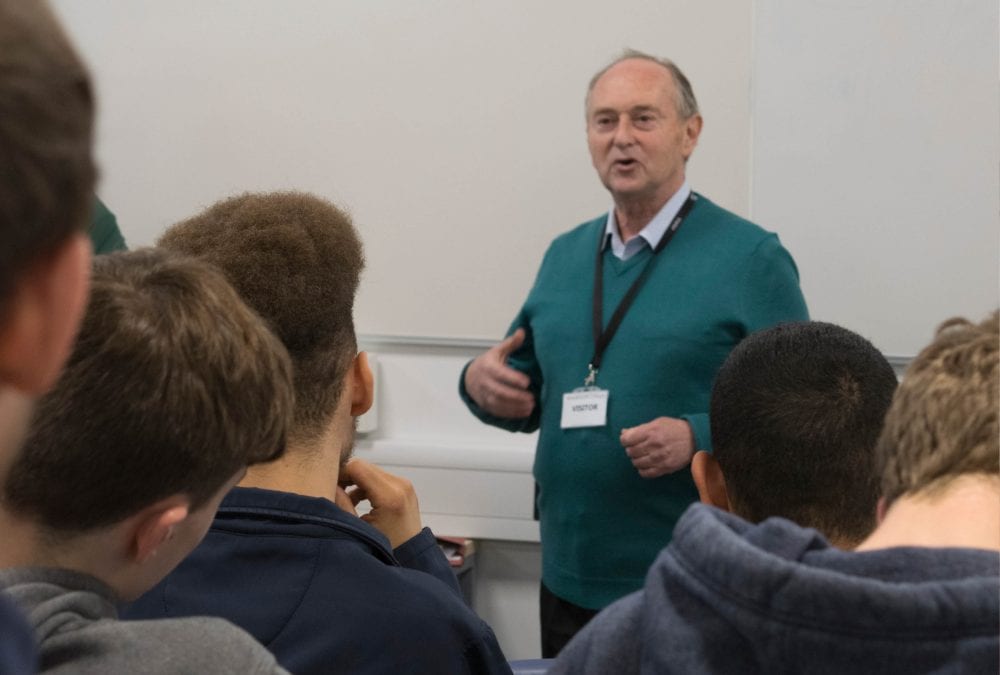 “If you don’t learn from history, you are doomed to repeat it.”

Born in France, Marcel Ladenheim recalled his experiences of the Holocaust during World War II. The visit was organised by the Holocaust Educational Trust (HET).

Forming part of their studies into World War II, students watched a BBC2 documentary, ‘Auschwitz: The Nazis and the Final Solution’, that revealed the horrific treatment of Jews throughout the course of the Second World War. 79-year-old Marcel spoke from the heart about the division and significant effect on his family.

At a time when Jewish people were racially abused, forced to wear a badge in the form of a Yellow Star as a means of identification and sent to concentration camps, Marcel revealed that his grandparents were murdered for “no other reason than their race.” At this point, he made reference to the following quote by historian, Edmond Burke: “Those who do not learn from history are doomed to repeat it.”

His mother was forced to take her young boys into hiding to escape capture at a time when France was under increasing Nazi influence. Marcel’s father was taken away and sent to a concentration camp, Auschwitz, from where he would never return. A family hid the two brothers but they were split when the family realised the danger in harbouring Jews, arranging for Marcel to be looked after by two sisters, Ogla and Esther Masoli. He was hidden by the Masoli sisters for the duration of the war.

Marcel’s face lit up when recalling being happy with the Masoli sisters and enjoying glorious Christmas days with toy soldiers and toy cars. Following the end of the war, he was reunited with his brother and mother.

Karen Pollock MBE, Chief Executive of the Holocaust Educational Trust added: “The Holocaust Educational Trust educates and engages students from across the UK, from all communities about the Holocaust and there can be no better way than through the first-hand testimony of a survivor. Marcel’s story is one of tremendous courage during horrific circumstances and by hearing his testimony, students will have the opportunity to learn where prejudice and racism can ultimately lead.

“At the Trust, we impart the history of the Holocaust to young people, to ensure that we honour the memory of those whose lives were lost and take forward the lessons taught by those who survived.”

Marcel’s testimony gave Uniformed Public Services students an understanding of historical events in relation to racism on a mass scale and an invaluable, unique insight into an experience of a Holocaust survivor.

Brooklands College wishes to extend a thank you to both the Holocaust Educational Trust and Marcel Ladenheim.